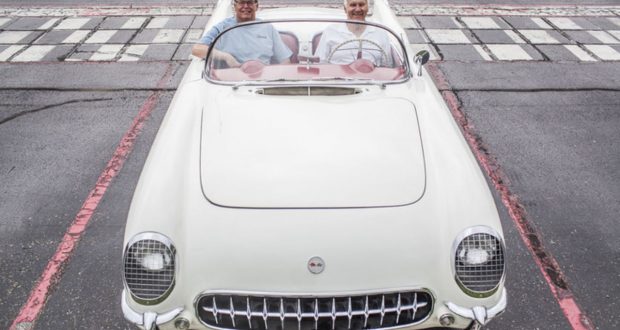 Dick Webber, right, of Bowling Green, and Scott Rogers of North Aurora, Ill., pose for a photo in the 1954 Corvette which formerly belonged to Weber and currently is owned by Rogers on Monday, June 27, 2016, at the Corvette Museum. (Austin Anthony/photo@bgdailynews.com)

Man Reunited with his 1954 Corvette 30 Years After Selling It

Treasure hunt: Man is reunited with car 30 years after selling it

Until Sunday, it had been 30 years since Dick Webber had seen the 1954 Chevrolet Corvette he once owned.

Webber was reunited with the car – which was once displayed at General Motors’ Bowling Green Assembly Plant after former Gov. John Y. Brown drove the first Bowling Green-built Corvette off the line in 1981 and parked it next to the ’54 model – when current owners Scott and Elizabeth Rogers brought the Corvette to Bowling Green from North Aurora, Ill., to meet Webber and tour the National Corvette Museum.

“They cared enough to go through all the trouble of trailering that car all the way down here from Chicago just for me to enjoy, which just blows my mind,” Webber said Monday, still ogling his old friend at the museum. “I drove it about 20 miles and it’s fun. … It’s nice for it to be back.”

“This is a very rare car … and before the internet, (finding) parts really was a struggle,” Webber said. “Everything about that car is just like a treasure hunt every time.”

Full Story:  Treasure hunt: Man is reunited with car 30 years after selling it 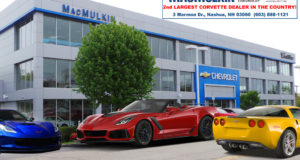 Corvette Owner Loyalty is Back!